The fib I told the kids about monsters and dragons. Part one. 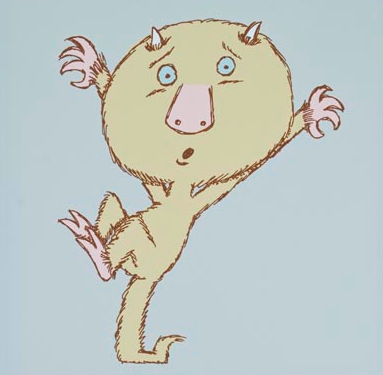 Leonardo.
From the book Leonardo the Terrible Monster, Mo Willems.
Facts about Leonardo.
Willems' wonderful doodlicious blog.  Find him on Facebook and Twitter.

Two separate things happen. Days apart. But when I reflect on them together, an awareness of incongruent-living emerges.

Briefly, Willems’ book is about Leonardo who is terrible at being a monster. He can’t seem to frighten anyone. Determined to succeed, Leonardo researches and practices. Finally ready, he finds a struggling little boy and “scares the tuna salad” out of him.

Just before I read the part when Leonardo yells at the boy, Elijah, one of the kids I’m reading to, says pretty loudly, “I’m scared of monsters!”

Elijah’s admission sets off a cacophony of frightening monster descriptions.

“There’s a snake monster under my bed. The eyes are yellow basketballs.”

“The dragon has a shark mouth and long legs, and it runs fast.”

“Mine is a hissing dragon.”

“My monster is a pirate with one eye and a peg leg who yells, ‘You know what happens when you have scurvy, don’t you? You walk the plank!’ And then I have to jump off the ship.”

I listen wide-eyed, nodding my head in understanding about such scariness.
I don't want to minimize their fear, name call the idea of monsters as silly, or disrespect their abilities to work with fear.

Without thinking I say, “I know about a monster spray. One squirt makes monsters and dragons evaporate. I’ll bring it next week.”

Immediately Elijah yells, “I want some!” Then, one by one, the rest of the children tell why they need this monster spray.

I learned about monster spray from a friend who saw it online. It’s a concoction of water infused with lavender drops, usually made by a grandmother like me with hopes of giving children and their parents restful sleep. A one-eyed monster image usually adorns a label declaring its efficiency at killing all monsters.

I decide to make some. I rationalize that pretending might work to rid pretend monsters. I buy a spray bottle and even write a label that has a drawing of a scared rabbit. 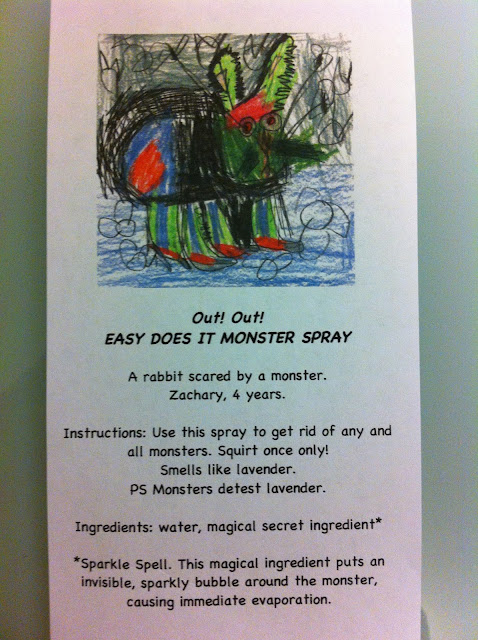 A big spider is in our living room. Though I like spiders and value their contribution to the cycle of life, they scare me.

I think they got a bad rap in the appearance department. As afraid as I am, I’m also fascinated, read about them, and invite them into the classroom.

I know that the spider in the living room is a baby tarantula. It's gentle, but scary! It might as well be a monster.

I head to the cupboard for a cup and then to my office for a piece of paper to capture the tarantula and carry it outdoors.

And then I stop dead in my tracks.

I realize that I'm encouraging the kids to use a harmful action to calm their fear. I don't want to encourage spraying. I wouldn't spray that tarantula with pesticides. And now I know I wouldn't spray monsters. (Plus there's another aspect: monsters are not physically real. Monsters exist in the mind. Spraying is pretending.)

I get some guidance from Mo Willem’s about how to talk with the children.

It’s near the end of the book, just after Leonardo the monster scares the little boy. He notices his feelings. Leonardo sees the fear in the boy’s face.

Scaring people turns out to not feel so hot.

And that’s when monster Leonardo shifts his thinking and realizes that he has other choices. Like this one: he could be a really wonderful friend to the boy.

Which gets me thinking.

They know how to reference, transfer what they learn, and associate. I want to impart peaceful ways of living and responding to life experiences. I believe they're capable of working with their thoughts.

I'm going to see if they can make their monsters their friends. But first I have to tell them the truth about the monster spray.

To be continued tomorrow.
Posted by Susan Michael Barrett at 9:18 AM