New eyes (and focus) from a wasp nose-landing 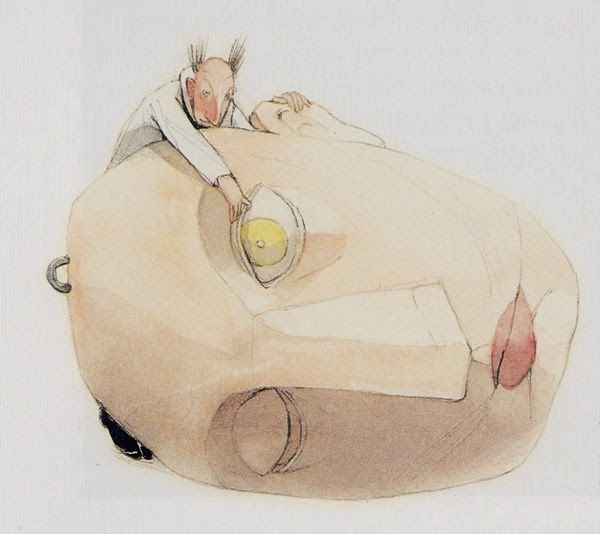 An image from the book The Wizard of Oz illustrated by Lisbeth Zwerger. The book is a retelling of L. Frank Baum’s original story. Found on Brain Pickings.

It’s not physical fatigue. (Well, maybe a little.) I’m mentally spent. I should, right this minute take a flying leap into the bed to rest this weariness, but I’m charged up up up as in oh-I-just-got-a-juicy-realization.

So here I am tap tap typing.

What is it now?

My active, alert, awake, apperceptive nineteen-month-old Grandson is a wasp.

When I’m with him, when he’s in my care, he’s like a wasp in the room. I go on high alert. Owl-eye alert. I’m awake and focused. Just like the time a wasp flew into our home and stayed a few days before it flew out. (That was some of my finest being present practice.)

This is how my aha unfolds:

I’m in the car listening to Pema Chödrön’s Walking the Walk talk. It’s from a weekend retreat at the Omega Institute in Rhinebeck, NY. This part grabs my attention: she says the mind has an inherent ability to focus, to be present and know what’s happening.

When I meditate, the tendency is that active mind leaves my mantra and goes off questioning an article about kale causing hypothyroidism or wondering what kind of snail it was I saw crawling up the screen.

And then Pema offers an example of what she means by inherent.

“Take tooth brushing,” she says. “I can brush and brush, froth it up, and all of a sudden I’m off thinking about something else. But what if I have an infected tooth? I’d be pretty attentive while brushing.”

There’s the inherent ability. (Thank you, pain, for the reminder that this focus is always there.)

I’m enraptured, enchanted and believing in my potential.

And, just after Ani Pema tells that part about the inherent strength of the mind, a wasp lands briefly on her nose. Out of the blue!

I notice by the intonation in her voice that she becomes totally focused on that wasp. I can feel her heightened awareness. I’m positive she gets that it’s a synchronistic explanatory gift.

And then it’s my turn.

I’m sitting in a chair near the pool. My gaze focuses on Grandson who walks the organic-shaped perimeter edge. Around once. And then again. He pauses on the deep end side. (He cannot swim on his own yet. Close, but if he fell in unwatched, uh oh.)

He turns and faces the pool as a diver might, toes curled slightly over the coping. He bends his elbows, raises his eyebrows, and stoops a bit.

(I remain in my chair. But, yes you guessed it: owl-eyes, quiet mind.)

He stills and watches the pool vacuum slowly sweep the bottom and inch up the sidewall. He squats deeper, a malasana stance that balances his forward lean, as his eyes follow the slow graze of the brush.

An upward swoop over and down moves Grandson two steps sideways.

And he begins again, with both of us, yes, yes, yes—accessing our inherent ability to be with what is happening.

That’s when I notice a few things.

I’m at full attention. It would be dangerous not to be. (Fear is one way to bring about the being present thing.) I’ve never seen a pool pump move so beautifully.

He’s at full attention. He’s with that brushing activity as if he’s been strengthening his mind to be present for eternity.

He shows me what we naturally know.

This isn't a fluke focus. Earlier, Grandson came to a complete halt when the air conditioner intake came on, turning his face upward and pointing at the air duct, smiling as if he just heard Leonard Cohen sing Hallelujah live.

I can learn from him how to be and see.

Ani Pema reminds us that it might be hard for us to be still, quiet, and focus. Yet, she encourages us to just keep practicing. Over time awareness becomes vivid and clear.

When I'm with Grandson, the instruction is to be there. All there. Awake and alert as if a wasp-beckoned my attention.

Posted by Susan Michael Barrett at 8:00 AM