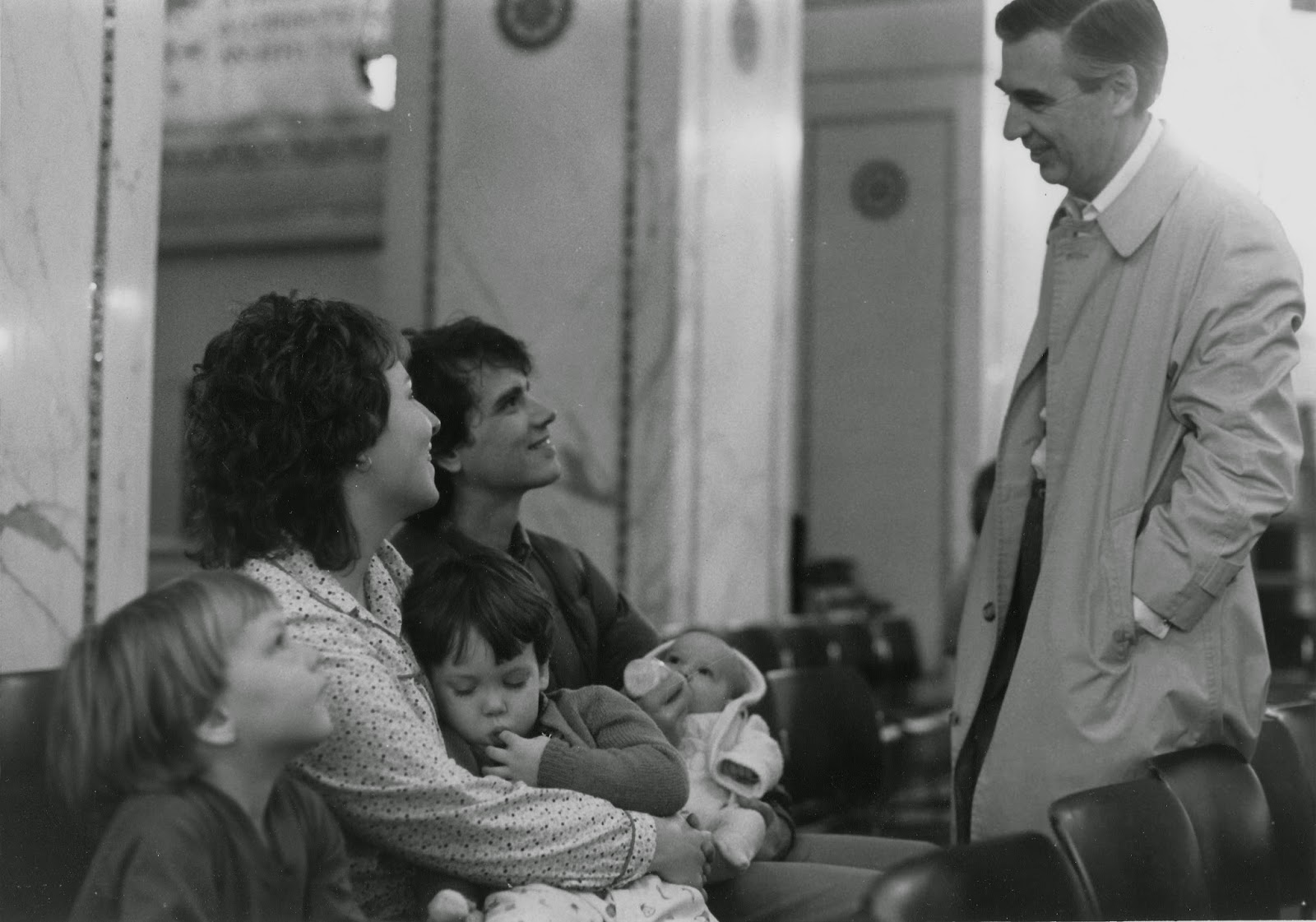 This is the second in a series of stories about Mariclare Barrett's special friendship with Fred Rogers (Mister Rogers). The first story, The Dollhouse, is here. Mariclare (Clare) is my husband Terry’s sister. (Clare has metastatic breast cancer, so when she visited recently, we made audio memos as a way to begin documenting memories.) Clare and her former husband had a close friendship with Fred, a friendship that began in 1982 when they interviewed him for an article in their magazine, Vegetarian Times. Their friendship continued until Fred's passing in 2003. The unedited audio is about five minutes. It's titled, How Clare Met Mister Rogers. The text of the audio follows.

He was a vegetarian, and at the time, my ex-husband Paul Obis and I were publishing Vegetarian Times magazine. Paul contacted Fred’s people to arrange for an interview for a cover story. So when Fred was visiting Chicago to do a show at the Chicago Public Library Cultural Center, we took our three children (the smallest was a baby in our arms, the other two weren’t watching television yet) downtown to the Cultural Center. Though the children weren’t aware of who we were meeting, we were certainly excited.

Before the program was set to start, Mister Rogers came out to meet us. He was wearing a trench coat and was unassuming in his looks and just as sweet and humble in his attitude as you’d expect him to be. We all met and chatted a bit. Then he and Paul got up and went to a side room to do the magazine interview. He talked about his decision to become a vegetarian and some of his lifestyle practices like swimming.

He swam a mile everyday. He swam in the Atlantic Ocean when he was on Nantucket Island where he had a summer home, and at a club he belonged to in Pittsburgh. Wherever he went, he found a pool and did his mile swim. That’s how he stayed fit.

Sometime, for the sake of not killing animals, he decided he didn’t want to eat meat anymore. So he became a vegetarian just like that and much to his family’s surprise.

Talking with him was so interesting! He and Paul really hit it off. And when we met, I felt our souls make a touchstone meeting. I could feel him, he could feel my heart. It was a very lovely introduction to an extraordinary man. I didn’t have a sense that we’d see each other again. But we did.

About a year after we met, he contacted us to say he was coming to Chicago for a meeting with the Sears Foundation. Since they supported his work, he had made more frequent trips to Chicago.

We made plans for him to come to our home in Oak Park for lunch. It’s funny because Nick and QB were attending a Montessori school, and they had begun to watch the children’s programming on National Public Television. I remember they got in their carpool all excited and announced that Mister Rogers was coming for lunch, and the other kids said, “Like right, and Big Bird, too?”

When they arrived home at midday they were beside themselves with excitement. They were jumping up and down from the couch to look out the window. Fred was late getting there.

A lunch of lentil burgers and various side dishes was all prepared. He was an appreciative eater. He loved good food. Finally he arrived and came in to the house and when he saw my boys, he compacted his six-foot frame to his smallest size to look them in the eye and say hello. They went from screaming, hyper-active, out-of-control kids to the most shrinking violets you’d ever want to see. They barely looked him in the eye and were suddenly so shy. They shook hands with him but didn’t have anything to say and kept really quiet from there on out.

We enjoyed good food and lively conversation in the short time he had to spend lunch that day. His schedule was always tight, but he made time for a number of home visits which formed the basis of our friendship which spanned more than twenty years.

Mister Rogers had no idea that burgers could be made from something other than ground beef, and he was delighted with these. They are still among my favorite meatless main dishes, and I think they beat any of the commercial veggie burgers.

This recipe is adapted from The Moosewood Cookbook. As the Food Editor of Vegetarian Times, I received a proof copy of Mollie Katzen’s fanciful, hand written cookbook for review. (Ten Speed Press recently published a 40th anniversary edition of The Moosewood Cookbook.) I loved it!  When my glowing review was published I had no idea that it would become the best-selling vegetarian cookbook of all time, or that Mollie Katzen would publish additional cookbooks and be a food writer for The New York Times in 2015. My how vegetarianism has come of age.

In a small saucepan, bring the water and lentils to a boil.  Lower the heat and simmer, partially covered, for 30 minutes or until the lentils are soft and the water is absorbed.  Drain any liquid that remains. Transfer to a bowl, add the vinegar and tamari or soy sauce and mash well.

Meanwhile, heat a tablespoon of olive oil in a medium skillet and sauté the onion until it is translucent, about 5 minutes. Add the remaining vegetables and walnuts and sauté an additional 5 to 10 minutes, until all the vegetables are tender.

Add the sautéed mixture to the lentils and mix well.  If you are not preparing for vegans, add one beaten egg to help bind the mixture. Thoroughly mix in the remaining seasonings and bread crumbs.  Refrigerate for about one hour (or more) to chill.

With wet hands, form the cooled mixture into four-inch diameter patties. Fry them in a small amount of olive oil until they are heated through and crispy on both sides. Alternately, you can broil them until crispy on both sides. Add a slice of cheese (vegan or dairy) if desired. Serve on toasted buns with your favorite burger fixings.

35 minutes prep time (less if you use a food processor for all the mincing.  Process the walnuts first, then the vegetables.)
1 hour chill time
15-20 minutes frying and assembling

Posted by Susan Michael Barrett at 12:00 AM