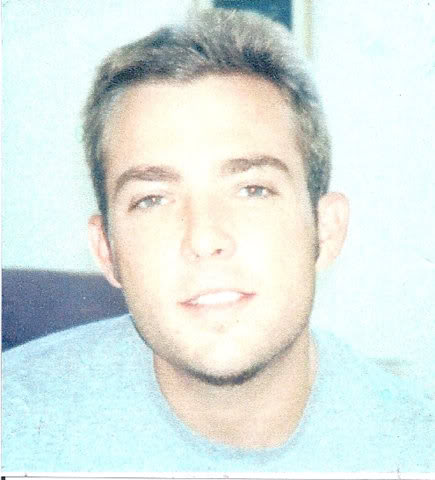 Michael visited us in Columbus before heading back to Florida where we were planning a going away party for him. (Florida is home and where our family lives.) He had just completed a rigorous Navy rescue swimmer program and was on leave before beginning his duty in Guam.

His graduation celebration became his memorial.

When someone asks what his work and training were like, I suggest watching the movie called The Guardian. In a sentence, he'd be the person to jump from a helicopter into rough seas to save you.

Michael was joy-filled, curious and adventurous, generous and caring, and made friends instantly. He also thrived on intense, risky experiences.

After honoring Michael's life, mourning our loss with family and friends in Florida and saying goodbye to him, I returned to Ohio to teach. The first early morning back, a triple rainbow arched in the sky. I felt it as a joyful connection to Michael.

There is so much I want to share about loss, letting go, the value of life, what I'm learning about living and dying, and the nature of existence. I will write about these precious lessons at another time. Today I want to write about something else.

Many people asked how Michael died. My first response was that he died of a big (enlarged) heart. I am his Mom and only saw the beautiful and kind things he had done for others. But there is more to share because I believe it is important.

I was in shock and denial about his death and it wasn't until I received his autopsy 12 weeks later that I began to admit to myself what happened. I read that he was a pillar of good health, in prime athletic condition, but I also read the list of prescription drugs, illegally obtained, in his body, and the words "death from an accidental overdose of Alprazolam, or Xanax." Michael began his joyful one-month home leave before active duty in Guam with good intentions. But it ended in a relapse that took his life.

Michael struggled all his life juggling sobriety and relapses. Finding that just-right high to work with his discomfort (moving across the world, unresolved past hurts) after a year of discipline and extreme physical training collided fatally with his addiction.

After he died, I felt shame and embarrassment and deep regret for all the things I imagined I could have done to protect and save him. Grief counseling and regular attendance in a recovery program taught me that I could not prevent his early death. However, I could look at how I was responding to this event, others, and my daily experiences. I began to work with the loss and its effects.

Attending grief workshops helped. Meditation has been my great friend. I am learning how to be with my experiences and allow feelings rather than rid them, to learn more about how I respond to life. I'm becoming aware of my thoughts, feelings, and patterns of relating. I am learning about the things I do—what helps and what hinders. This is a process. I have so much more to learn.

I will give myself this time to heal. I am writing these words right now to read over and over and over again because I will forget, that personal change, acceptance of life's turnings, and understanding with an insight imbued with wisdom, well it takes time. I am willing to stay with this. I pray for healing for myself and also for every other mother in this experience.

Michael was proud of the slogan of his work: "So others may live." May his life benefit others.

I am so fortunate that I got this time with him.
Posted by Susan Michael Barrett at 7:50 AM