Taking a 7 year-old to the opera 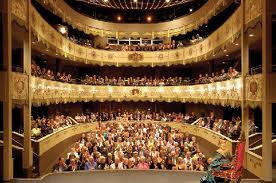 Michael and I go to see Orpheus and Euridice.
Historic Asolo Theater, The Ringling Museum of Art. Sarasota, Florida. 1984

I remember when I introduced opera to my son Michael (@ 7 years young). He had an active and intense personality. He was also interested in mythology and classical music. I thought he'd like Orpheus and Eurydice. He did!

I’m grateful for some parenting encouragement I received beforehand. A friend said, "Don't expect to see the second act!"


So my expectations? Low--especially in the area of practicing stillness and quiet.

I thought about what I wanted to accomplish and expect: Sharing time with Michael, being in the opera house, and introducing him to another way to experience a story. That defined success for me.

Before the performance, I read him a story about Orpheus from his favorite mythology book. And, we had an important conversation about opera behavior conventions: We go to the bathroom before or after the performance, or during intermission. When we get to our seats, we stay seated. When the curtain goes up, it is time to open our ears and eyes and close our mouth. No noise helps us hear and is a way we are kind to others who are listening.

I chose a matinee and took only Michael—no other siblings or friends. We had box seats. We didn’t go to our seat until 5 minutes before the performance began. I told him the performance lasted more than an hour. "We'll stay as long as we can remain still and quiet."

The performance began and he was captivated!

When he got restless, I whispered, "Can you sit still any longer?" He said, "No." Since I told him beforehand that we'd stay as long as we could be still and quiet, leaving didn't feel like a punishment.

Too often adults forget to prepare children for experiences. And even when we prepare, we assume they will behave do what they are told because we told them. Once a lesson is given, it takes many practices. Progress is the mantra. And patience.
Posted by Susan Michael Barrett at 7:41 AM