Peace is easier to talk about than practice 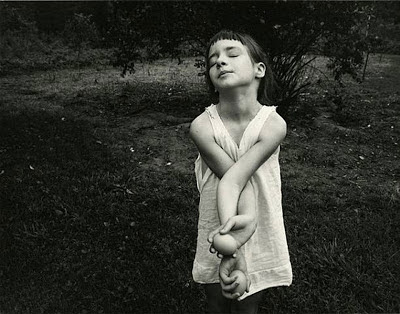 Emmett Gowin (b. 1941)
Nancy Wells, Danville, Virginia, black and white photograph, 1969
Terry Barrett was asked to talk about peace. The title of his talk was, "Towards Peace through Listening (about Art)." He chose this image for the focus of his presentation.


I was part of a group of about 50 people who gathered to learn more about living peacefully with others.

I’m sitting in the group. I listen and hear a person say that they look forward to the lecture and learning about peace in other cultures. We all wear name tags.

Terry projects the Gowin image you see above on a large screen. The room hushes. He says,  “Let’s quietly contemplate this image. What do you see and what is it about?”

He says, “Now, let's talk about this photograph. We will listen to each other. I need a volunteer to begin.” A woman named Mindy raises her hand. “Thank you for volunteering to go first, Mindy.”

Terry tells her and the group, “This is the activity. Say in one sentence or two, not a paragraph, what you see or what the photograph is about. We will all listen. Someone who wishes to participate will raise their hand and repeat what is heard. Then, that person will speak and someone will say what is heard. Are there any questions?” No one has a question.

Mindy begins. She describes what she sees in a sentence. She adds a second sentence. A third. She says what the photograph means to her in a few words that becomes 1, 2, then 5 sentences.

Terry asks for someone to say what is heard. Andrew raises his hand. “What did you hear?” Terry asks.

Andrew summarizes in his own words.

Terry asks Mindy, “Is that what you said?” She shakes her head no. Terry suggests she try again in one or two short sentences. “I see entwined arms of a child who looks to be 8 or 9 years old. Each hand holds an egg,” says Mindy. Andrew repeats what he hears and she confirms it.

Andrew speaks for about 5 minutes. Twyla volunteers to say what she hears. She begins and forgets. “Andrew, I don’t remember, can you tell me again?” Andrew repeats. Twyla says an interpretation of what she hears. Terry asks Andrew if this is what he said. “No,” Andrew replies. Terry encourages, “Andrew say what the photograph means to you again.” He does and Twyla successfully tells the group what she hears.

Several others speak and listen. Then it’s Mary’s turn.

Mary says what the photograph means to her. Linda tries to say what she hears and can't. She is flustered. She says, "I don't care what she said. I just want to tell you what I think."

There is a buzz about the room as people turn and talk to those seated nearby. After a few minutes, our voices silenced. Linda's hand tentatively rises. Realizing what happened she says, “I get it. I don’t want to listen. I just want to talk and tell you my ideas. This is hard."