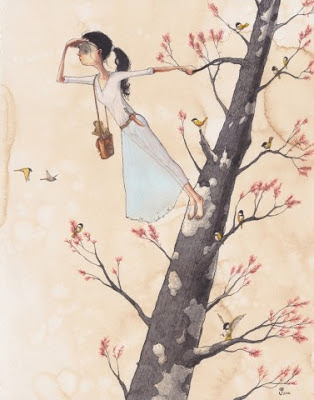 The children quiet when I sit the continent globe on my mat. Elijah asks, “Are we going to sing?” Elijah remembers The Continent Song we sang together at our last lesson.

The other book is Children Just Like Me by Barnabas and Anabel Kindersley. It has photographs of children who live all over the world. I introduce them to Omar who lives in Mexico and Levi who lives in a remote town called Iqaluit in Canada.

After reading I ask, “Do you remember the Montessori globe lessons?” They do! 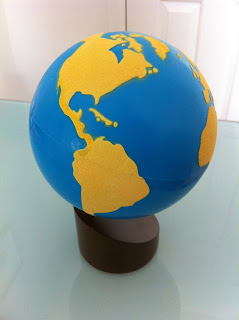 One lesson is about land and water. I use a Montessori Sandpaper Globe. That lesson goes like this:

“Do you see this? It’s called a globe. It’s a globe of where we live. Children, pretend you are in the space shuttle and it takes off. You go fast and high and when you’re far away in outer space, you look back. This is a model of what you'd see. It's what the place where we live looks like. It's Earth!”

I touch the beige and blue colors as they notice the land and water. 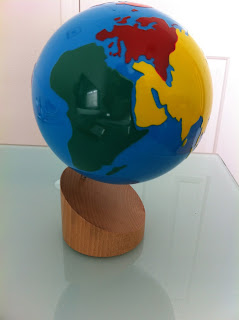 The second lesson introduces the Continent Globe and teaches the names for water (ocean) and land (continent). 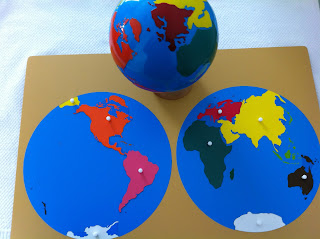 Next is the Continent Puzzle Map lesson. I place the Continent Globe and Continent Puzzle on my mat. I say, “Use your imagination. Pretend we can cut this globe in half, take the two halves and flatten them. This is what it would look like.” I point to the puzzle map. They practice identifying ocean and continent on the map.

I tell them that the continents have names. I teach their names by singing “The Continent Song.” I sing once and they listen. I sing again and invite them to sing with me. They like singing this song!

The Continent Song. There are several versions. Here's the one I sang with the children at Starr's House.

Which brings us to today. We focus on North America and talk about Omar and Levi, where they live, go to school, and what they like to do for fun. Peyton notices that Omar has a pet tortoise and flippers for snorkeling after school whereas Levi plays hockey. In winter where Levi lives, there is daylight for only two hours. I show them where Mexico and Canada are on the map.

The children use a pin punch activity to create their own continent map. We begin with North America. 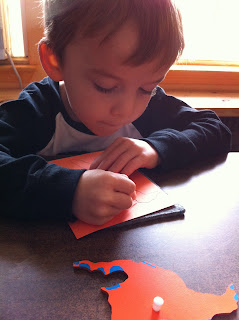 NOTES
What used to be called Australia is now called Oceania.

There are three ways I invite children to practice learning. Montessori teachers call it the three-period lesson. It provides a sequence for mastery.