A mistake I made: I used to feel responsible for my son's feelings, thoughts, choices 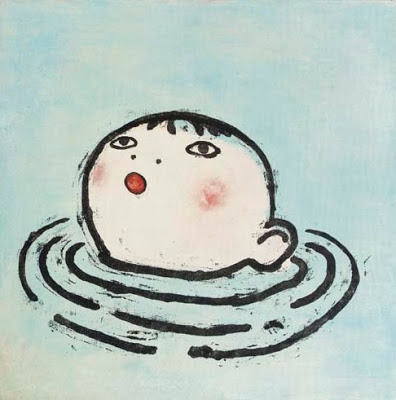 The Swimmer, Yoshitomo Nara, 1992. Oil on canvas.
Japanese painter, sculptor, and draughtsman.
Find him on Facebook and at Artsy.
I listen to a parent tell me about his son. The son needs to borrow money.

I listen as he tells what he sees: a job loss, irresponsibility, a pattern of borrowing and not paying the money back. A big red flag rises when he says, “A family member caught him stealing medications from the kitchen cabinet.” I ask, “Do you think he might have a drug problem?” He pauses and says, “I don’t know. He’s such a good kid. He just needs a little help. I gave him $20 so he could get dinner.”

This story is familiar to my past. I remember mistakes I made with my son. I remember my inability, unwillingness, and lack of readiness to see reality when he was alive.

A parent is supposed to love, protect, and support a child. But what does that mean?

Like this parent telling me about his son, I didn’t know what love, protect, or support looked like. For example, I used to think and feel responsible for my son’s feelings, thoughts, actions, choices, wants, needs, well-being, lack of well-being, and ultimate destiny. I felt compelled to help solve his problems.

That thought was a huge mistake.

Philosopher Daniel Dennett says, “The chief trick to making good mistakes is not to hide them—especially not from yourself.”  I like the notion of a good mistake. That means I can learn something. “So when you make a mistake…learn to take a deep breath, grit your teeth, and then examine your own recollections of the mistake as ruthlessly and as dispassionately as you can manage. It’s not easy.”

Dennett’s right. It’s not easy. Feelings come up when I “ruthlessly reflect.”

Taking Dennett’s suggestion to examine mistakes, here’s what I've uncovered related to that parent's share about his son:

I gave money to my addicted son whenever he asked.

I kept an open checkbook with him.  I intuited it was the wrong choice, yet I struggled to say no. It was not a new struggle. I had a poor record of saying no since he was a toddler. Even though I knew subconsciously that my son would use the money to buy drugs, I gave it to him. “He has to eat,” I thought.

I was unable to feel or see my life or the asking-for-money situation from a third party view—you know, someone who could look and listen as if reporting for National Geographic. That would have brought some clarity. I call this inability to see reality denial.

Occasionally I saw reality, yet I pretended something else.

I didn’t know that denial is a way I protect, even rescue, myself from discomfort. Denial caused a long delay in closing the Bank of Susan and telling the truth, if at the very least, to myself.

Instead of seeing reality, I blamed my son for his behaviors. And I blamed the system, or another (the drug supplier, his friends' influences).

Blame fuels confusion in a relating dynamic. I now believe blame is injecting my discomfort or pain into the one I’m blaming which is an escape, distraction, and one way to numb the pain. I’d blame then feel bad and rescue him and then feel bad for rescuing, which led to woeful why me-ish, victim feelings.

When my son asked for money, I saw his puppy dog eyes. His request was often spun within a context of hardship, money for food, gas, to pay a bill or for something direly needed. I didn’t know how to say no to him, or others. Learning to say no is a self-care skill. I was unaware of how helpful the practice of saying no would be in my life, or in my son’s life.

When I did say no, I often changed my mind. I didn’t keep my word. It’s not a fluke that the first of The Four Agreements in Don Miguel Ruiz’s book of the same name is “Be impeccable with your word…being impeccable [means] not going against yourself.” I was slow to see that I waffled and went against myself just to please him.

I had not examined my beliefs. When I did, I noticed that I acted from an old belief that my kids are an extension of me. A chip off the old block! I thought if my kids did well, I looked good. If my child messed up, I failed or was a failure as a parent. My new belief is more in line with what Gibran says, “Your children are not your children. They are the sons and daughters of Life’s longing for itself. They come through you but not from you…You may give them your love but not your thoughts, for they have their own thoughts…”.

I was extremely uncomfortable when my son was upset. If my son was not happy, I wasn’t happy. I liked life much better when he smiled. I was unaware that being human means experiencing a gamut of emotion, including being unhappy and not getting what you want sometimes.

Then I discovered something that did work: I looked at myself—my own beliefs, thoughts, and feelings. It takes courage to look at myself and take responsibility for my choices. It takes courage to feel, express, share and release old beliefs, thoughts, and feelings in order to make room for new ways of relating, seeing, and being.

I began to understand that if I change, my relationships and situations change. I began to pay attention to what I thought and did. I gave up owning my son's problems. (Oh, and he wasn't the only one I tried fixing, rescuing, and managing. I gave up owning all problems that were not mine.)

Today, with ongoing counseling and 12-step work, I'm more aware of my mental conditioning and behaviors. I know a lot more about the nature of my codependent compulsion. I'm committed to allowing myself to have all types of feelings whenever they come up. (Feelings inform my experiences and offer valuable information I call data that becomes my ticket to living with presence.) I believe my son and everyone get opportunities to become aware, learn, and change.

I take Fyodor Dostoyevsky’s words into my heart when it comes to addiction and negative behavior: “Above all, don’t lie to yourself.” (The Brothers Karamazov). I stay closer to reality and out of denial by at least telling myself the truth. I need that truthfulness to work on wakefulness.

So, when this parent shared, he asked if I had any experience with this. I did. And I told him. Perhaps he saw himself in me.

Posted by Susan Michael Barrett at 7:46 AM

Practicing peace in the backyard: what children taught me when a wasp was on its back 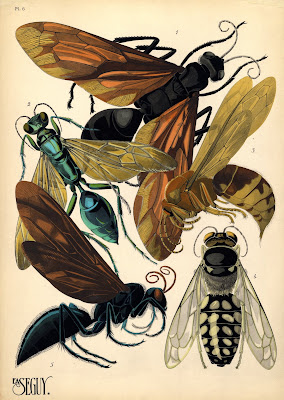