A Wild Thing: when scared, instead of fleeing, I join the (feeling) rumpus 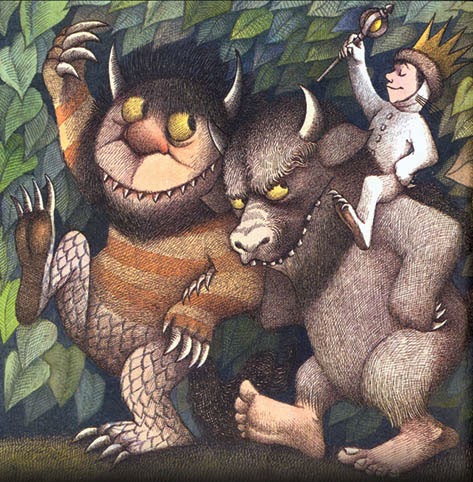 Where the Wild Things Are by Maurice Sendak, author and illustrator

(I wrote this post almost three years ago just before moving from Texas to Florida. I'm posting it again today, April 23, 2017. These past few weeks I've experienced a similar hurried and "too-busy-to-live-life" pace. When that happens, I know that I'm running from something. When I'm aware I'm in this hustle, I'm grateful I notice.)

I have a problem.

Even though I changed my pace while at a retreat, I’m back to mindless quick-there’s-somewhere-to-go or something-to-do.

Gulping quickly chewed food. Walking fast. Getting “it” done. I even ran my grocery cart on the heels of a forgiving woman. After that, I took a breath. Ten minutes later I entered a line for check out, backed out, and then backed out again.

The good: I noticed.

I recently paid $280 for doing two things at once. I was talking on a handheld cell phone while driving by my neighborhood elementary school.

(Fortunately I was only going 14 mph, or I might have had to take out a loan to pay my citation.) Multitasking, I was totally oblivious to obeying the law.

That was a few weeks ago.

Yesterday in a slowed-by-yoga saunter back to my car I had an insight about my hurriedness.

First, let me back up.

I’m moving from Texas to Florida. I’m heading to a place I call home and eagerly look forward to new experiences with my husband, and time with my daughter, son-in-law, their children, and family and friends. I also long for the water, sun, sugar-fine white sand, crystal light, and birding joy such as watching the scare tactic of “wing flinging” by wood storks in the back yard (it’s how they catch fish).

If I measure my delight about this move with a pendulum, give it a mighty and vigorous swing, and then watch that pendulum swing equally in the opposite direction to then have a measure of my feelings about letting go of all I like about being in Denton.

Though I live life as an adventure and view my home as wherever I place my head at night, I’m uncomfortable. Five years in Denton is long enough to fall in love with new friends.

So what does this have to do with hurry?

I realized I’m rushing to make time pass quickly and to slow other time down. Get it all done, stay busy. Or, hurry to make more time.

Silly me. What illusion of control.

Hurrying doesn’t release the discomfort of being in between here and there.

Moving is in the realm of loss, positive though it is.  And experiences of loss hold hands with other losses. That means that when I feel what comes up about leaving Denton, bits of past losses come up. Death claims a child. Letting go of a terrific job, a home, a conservation group, a business. A marriage is over. A pet passes. A joyful experience ends. Health fails.

A wise teacher once told me that if a feeling is more than two on a scale of one-to-ten, then the feeling holds more than the current event that triggers it.

Sometimes it’s not easy to feel. My long-held habits centered on a need to control to push away discomfort. My patterns are stoically hardening, moping, complaining, woefully explaining or justifying. However, each time I allow myself to feel, these patterns lessen.

My hurrying is a disguise.

I see a sign from the reliable guide of awareness. Hallelujah.

My less-than-best-self thinks there isn’t time for this grief stuff. Grabbing for denial, I think: “Hey, Susan—you intellectually know what’s going on my mind chatters, so get on with packing or doing this or that. Feel good now that you thought it.”

Thinking and feeling are different.

Being emotionally open and free means letting go of thoughts like:

“I’m not that kind of person who feels like that.”

“No one wants to hear about these feelings.”

“I don’t have a right to feel hurt; it isn’t fair to everyone else.”

Those thoughts deflect, suppress, and repress.

Emotional freedom is when one of Maurice Sendak’s wild things (Where the Wild Things Are) shows up to scare me, to scare me out of feeling. And instead of fleeing in fear, I inwardly declare I'm not afraid and realize I am the rumpus.

I don’t need Max’s crown. I need to slow down, call on some ordinary courage, and feel.