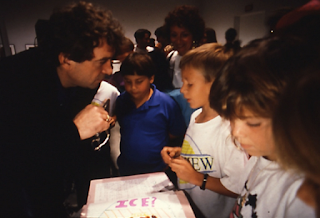 William Wegman listens to a student share his fairy tale. @1991.
The tales were collated and bound into a book. The children also sewed a quilt of their drawings and presented it to Wegman. Pine View School, Sarasota, Florida. Teacher, Reva Ginsberg Levy.

Someone asked why I spend so much time watching and being with young kids.

There's a lot I can say.

I like that children think they can be president of the United States, climb Mt. Everest, or travel into space. I like that they aren't afraid to pet a furry caterpillar or hold a spider or say what they think. I like that they do for the love of it and aren't interested in pleasing others. I like that they notice things. Little things. And make stuff up. About anything.
I'm not the only one captivated by children. Artists often talk about what they learn from watching and listening to them.

Ideas come, and it all happens quite by accident.

Like the time I worked with a group of extraordinary arts leaders: William Wegman, Nancy Roucher, co-director of a Getty-funded Florida teacher training institute, artist Ron Yrabedra, and Pine View teachers, Pat Johnston and Reva Ginsberg--and students in the early 90s while working at the John and Mable Ringling Museum.

Wegman was coming to talk to kids about his photography and we wanted to prepare for his visit. His work includes large color polaroid photographs of his weimaraners.

The event would take place in the museum galleries.

In preparation to meet and talk to him (for a dialogue—think Oprah style), elementary students spent weeks studying his work by talking about what they see and what it means (an approach I learned reading Terry Barrett's books).

For one lesson, they chose a photograph and wrote a fairy tale about it. During Wegman's visit, they gave him their tales.

A couple days later, Wegman called the curator (who called me) to say Wegman thought about the students' fairy tales on the plane ride back to New York City. He said he really liked them.

Posted by Susan Michael Barrett at 11:54 AM