Collaborating with students to create art museum programs and installations 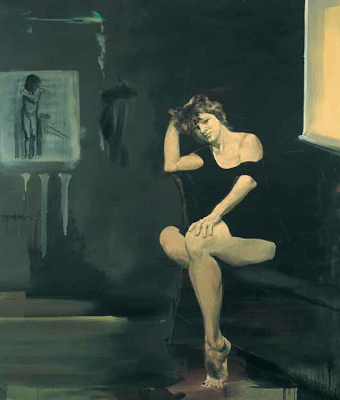 Portrait of an Artist as a Woman, 1989, Eric Fischl. Oil on linen.
This painting was part of the Four Friends exhibition. His website and bio.

I worked in an art museum.

An integral aspect of our educational philosophy was collaborative teamwork. Museum staff worked with teachers and students to create educational programming, events, and community experiences.

We came together to talk about what we cared about and what we wanted to learn.

This unusual empowerment of students happened because David Ebitz, then director of the Museum and a former museum educator at the Getty Museum, knew its potential. The seed of teaming with schools was planted earlier by Nancy Roucher, a champion of the arts in our community, and co-leader of the Sarasota Art Institute which was part of the Getty Education Institute discipline-based art education consortium.

While working at the Ringling Museum, I met many talented teachers and students. Of special note are students Brandon Oldenburg and Ryan Sias, (Ringling College of Art and Design students).

The first program Brandon and Ryan created was a life-size puppet show with live music telling a story of the history of art. The puppets were made of found materials (they had a $100 budget). It was called the Concert of the Arts. (Ryan Sias has a YouTube channel of his current work. The Concert of the Arts is archived here.)

Brandon, Ryan, and their classmates performed the show for local elementary students, and also for 21 Florida museum directors and education representatives attending a conference at the Ringling Museum of Art.

Their next project was a Friendship Room, an education space installed at the Ringling Museum in conjunction with the exhibition Four Friends, the art of Eric Fischl, April Gornik, Ralph Gibson, and curator Bruce Ferguson.

The success of this project, filmed by The Getty Education Institute as part of their Art Education in Action video series, became a door opener for about 20 more education installations at the Ringling Museum.

Brandon's creativity exploded. This 2 minute video clip, one in a series of nine, is about the making of The Fantastic Flying Books of Mr. Morris Lessmore, a short film and now iPad book for children created by Moonbot Studios.


The Making Of Morris: Part 1 (The Power of Story) from Moonbot Studios on Vimeo.

His iPad children's book has won 22 awards.* The New York Times review says it "is the best iPad book out there."

Before the iPad book, Brandon worked with noted author/illustrator William Joyce to create Morris Lessmore as an award-winning short film (described as a love letter to books and curative power of story.) Inspired in equal measures by Hurricane Katrina, Buster Keaton, The Wizard of Oz, it's about people who devote their lives to books. Available from the iTunes APP Store.